When fumble-handed cook Mina Cucina drops the spaghetti pot, a new animal is born. As the Spaghetti Giraffe soon learns, he is not the only kitchen animal formed from Mina Cucina's culinary disasters.

The Spaghetti Giraffe tells the delightful story of the Spaghetti Giraffe and his quirky friends in their quest to help Mina Cucina enter the Great Bonbon Confectionation – the biggest baking competition the valley's ever seen. All she needs is a cake. A cake that doesn't erupt, take flight or explode.

The Spaghetti Giraffe is the first book in a trilogy, and has been published in Turkish, by Yeni Insan publishing company.

How I wrote The Spaghetti Giraffe

The story for The Spaghetti Giraffe came to me when I was on a plane. I was on my way to a children's writers' conference. I don't often get to be by myself, and I don't often sit still, so I guess the story saw its chance to arrive and took it.

Actually, what arrived wasn't the whole story. It was just the first four lines. But I could tell straight away that there was a bigger story behind them, and it wanted to be told!

When I got to my hotel I wrote the lines down.

When Mina Cucina slopped the gleaming pile of spaghetti onto the waiting plate, her hand slipped. As usual.

Mina Cucina's hands flailed like startled cats, as the pot somersaulted through the air. The spaghetti fell from it in a glittering arc and landed on the floor.

I thought that might be it for a while, but the whole story came pretty soon after. I missed quite a lot of the conference, because I was in my room writing.

There are some great characters in The Spaghetti Giraffe, and I had a lot of fun writing about their escapades. Thankfully they hung around, and there are now three books in the series. The final one will be published in 2020.


Print out the sheet, then colour, cut and pin it to make a moveable model of the Spaghetti Giraffe. There are also some great colouring-in pages, taken from the books, for you to print out and enjoy.

Read the start of The Spaghetti Giraffe

Read the first two chapters of The Spaghetti Giraffe, in PDF format.

"It's surely the mark of a skilled writer who can bring to life such a bizarre premise as this book posits. Tiny food animals, formed from kitchen spillages, live under the cooker until they're swept up and banished to the land of In-The-Bin. One of these food animals, the Spaghetti Giraffe, is not like the others. He's carefree and curious about the world; he wants to go out and about. Besides, he can't fit under the cooker very well. He's also concerned about his creator, the wonderfully whimsical and shambolic Mina Cucina, who's fretting about the Bonbon Annual Confectionation and how she's going to avoid coming last – again. Sarah Johnson is the indie author / publisher of The Bold Ship Phenomenal, a Storylines Notable Book and shortlisted for the New Zealand Children's Book Award. The Spaghetti Giraffe is even better." 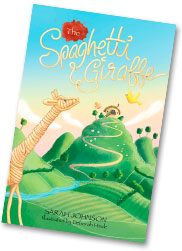 Published by Flat Bed Press, 2017.
ISBN 978-0-473-39140-9
Illustrations by Deborah Hinde.
Available in print and as an e-book.
Also available in accessible formats from the Blind + Low Vision NZ library. 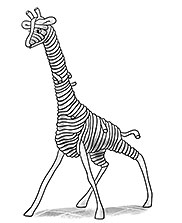 The Spaghetti Giraffe sales and trade information download the PDF. 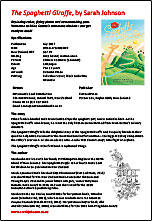